This morning, I made my third attempt at watching the RNC proceedings. My first was a minute-long foray into Kimberly Guilfoyle’s speech, which ended when I found it impossible to listen to a speech that described Puerto Ricans as immigrants. My second was an attempt to listen to Donald Trump, Jr., aborted about 30 seconds in, after he described a bunch of hapless virus-carrying bats as members of the Chinese Communist Party. This morning, I managed to make it all the way through Mike Pompeo’s speech from Jerusalem–a bittersweet event for me, because as an “ordinary citizen,” like Mike, I too had planned to go to Jerusalem this summer, but couldn’t, when I was mysteriously “struck” by unemployment in the best economy (with the best employment rate) the world has ever seen. 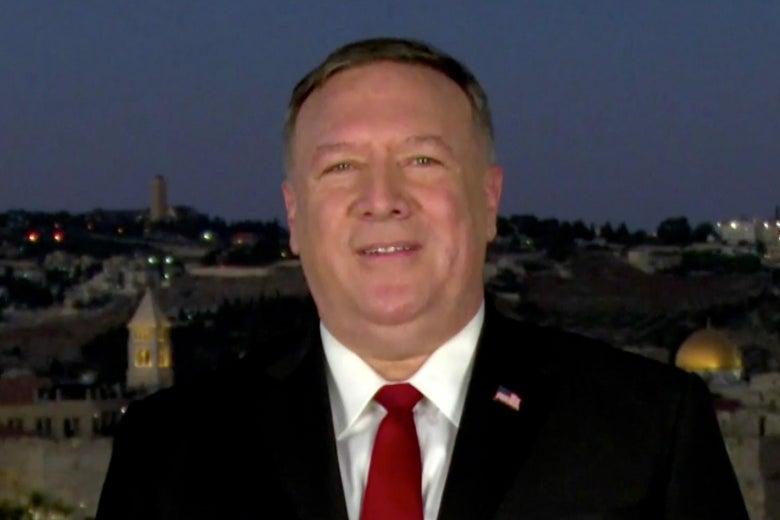 Most news reports omitted the exact location from which Pompeo gave his speech, but Fred Kaplan of Slate got it right: Pompeo was speaking from the rooftop of the historic King David Hotel in Jerusalem. Love the symbolism there, and its juxtaposition with Mike’s message on how Trump’s policies keep us all “safe.”

A little history lesson for the uninitiated:

Zionist Terrorism, British Crackdown, and American Politics. The Labour government’s dependence on American financial aid emphasized to Bevin and Attlee the precariousness of their Palestine initiatives, especially when one American Zionist, Rabbi Hillel Silver, linked them to congressional approval or disapproval of their loan request. In addition, Jewish resistance intensified following the British refusal to admit the 100,000 refugees, as advocated by the Committee of Inquiry’s report in April. Before the report became public, a LEHI attack on a parking lot in April had killed many British soldiers. Once Bevin rejected the 100,000, the Hagana, the Irgun, and the LEHI collaborated in mid-June to undertake raids on railway installations. During the third night of these attacks, June 18, Irgun forces captured three British officers and threatened to kill them if two Irgun members were hanged in accordance with their sentences. The threat succeeded; the British commuted the sentences to life imprisonment and the Irgun released their British hostages. Attlee and Bevin then decided to try to crush the Zionist resistance by raiding the headquarters of the Jewish Agency. This operation, carried out on June 29, was designed to seize agency files, arrest the Hagana leadership, and disrupt what they correctly believed to be Hagana-coordinated resistance to the British presence. Although 2,700 people were arrested and massive documentation was taken, little of significance was learned, in part because the Zionists had been forewarned.

The Irgun, under Menachem Begin, reacted by proposing to blow up the King David Hotel in Jerusalem; it housed the British administrative offices and was a prime symbol of the British presence in Palestine. The Hagana assented initially, but they later withdrew support following an appeal by Weizmann to suspend resistance temporarily. Begin then carried out the operation on his own and scheduled it for the middle of the working day. The resulting explosion, on July 22, killed ninety-one British, Jewish, and Arab personnel and wounded dozens more, leading Churchill to declare in the House of Commons that Palestine was relatively unimportant to British interests; horrified at this lost of life, he questioned the need for future casualties. But many in Britain wanted revenge, especially the military and the Labour Party, who were determined not to appear weak in the face of violence. Nevertheless, the logic of Zionist terrorism was bearing fruit, bringing home to the public at large the cost of maintaining a hold on Palestine (Charles D. Smith, Palestine and the Arab-Israeli Conflict: A History with Documents, 9th ed., pp. 183-84).

I don’t know exactly what message Mike was conveying, but here is the one I got (hell, if QAnon can hear tacit messages in the pronouncements of Trump Administration officials, so can I):

That, for a change, was a message worth hearing through to the end.

One thought on “Pompeo and Circumstance”