You’ve probably seen that meme of the couple in bed, where the woman suspects that the guy is thinking of other women, and the guy is lying there thinking about video games or whatever. That meme is a perfect encapsulation of the communicative relationship between Iran and the American people. The Iranians are trying to tell us, “Hey, our proxies have hit your embassy after weeks of trying!” And we’re sitting there, fixated on Kobe Bryant. The attack on the U.S. Embassy in Baghdad took place last night, but wasn’t reported in The New York Times until 5:15 this morning. I mostly read about it in obscure foreign outlets. A helicopter crash that kills a former basketball star is a breaking story, but a direct missile attack on the U.S. Embassy in Baghdad isn’t. Priorities.

It was unclear whether any of the other four rockets launched in the attack landed inside the embassy compound, but the assault prompted alarm in Washington over how to calibrate the response. For security reasons, neither the Iraqi nor American officials, or the embassy, would discuss locations or other specifics of the attack.

“Prompted alarm.” Does “Washington” really look all that alarmed to you?

I doubt it’s really “unclear” where the missiles landed; more likely, it’s known both to the Iraqis and the Americans, but being concealed. Whatever the reasons for concealing the specifics, the effect is to treat the attack as a non-event–which abets the widespread American propensity to stick one’s head in the sand about it. Never mind that this attack is precisely “the imminent attack on our embassies” that the assassination of Suleimani & Co. was undertaken to prevent. 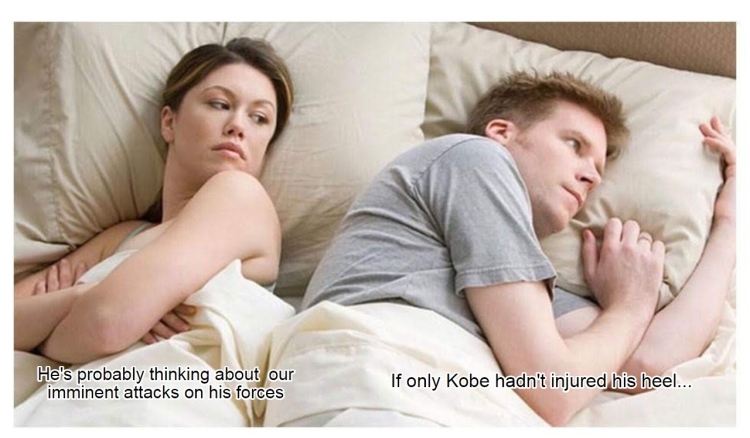 So here is that “imminent attack,” weeks after its imminent arrival. And here is the attack supposedly prevented by our assassination of Suleimani, conspicuously unprevented. And here finally is the invincible U.S. government, whom no military force would ever dare to attack for fear of annihilation, attacked–in part because its embassy sits exposed to missile fire by any half-assed militia that fires one, and in part because it stands protected by an Iraqi government that claims not to want American troops in Iraq in the first place. I guess our embassies are also protected by troops garrisoned miles away, in bases equally lacking anti-missile defenses–unless you count bunkers and medevacs as anti-missile defenses. But fear not: Washington is “calibrating a response.” It looks more like it’s holding its own troops out as bait to be attacked in order to furnish the pretext of a full-scale “retaliation.”

If any of that sounds to you like “disrespect for our troops,” you’re reading me wrong. Put in the position of “our troops,” I’m sure I’d want to hide in a bunker and be evacuated, too. I’m not blaming our troops, the most pointless of pointless exercises. I’m blaming the people who put them there. The bipartisan disrespect for our troops comes from people who’ve put those troops in harms’ way without clarifying what, especially in the post-Suleimani situation, they’re doing there, or why.

Donald Trump’s guilt on this matter is too obvious to be belabored: the president who promised an end to all those foreign wars is doing his best to get us into a new one. But spare a thought for the confused Democrats whose main criticism of Trump is that we might now have to leave Iraq.

I am very concerned that the killing of Suleimani will result in American forces having to leave Iraq (which was Suleimani’s goal), or at least make it harder for us to partner with our Iraqi allies against terrorist groups like ISIS, and that it will accelerate Iran’s efforts to develop nuclear weapons.

Careful what you wish for. That’s Rep. Tom Malinowski (D-NJ), in a January 19 letter to me. Never mind that our Iraqi “allies” want us to leave their country, and that our presence in Iraq does nothing to decelerate Iran’s efforts to develop nuclear weapons. For Democrats and Republicans alike, the occupation must go on, whether it has a point or not.

This attack “only” hit an embassy dining hall, and “only” injured one person. Eventually, the attacks will get more accurate and more persistent, and hit “high value targets.” If at that point, the American people decide to wake up but instead of demanding withdrawal, demand “retaliation” for a fight they started, they’ll have no one but themselves to blame for what happens next. It may or may not be coincidence that what apparently did Kobe Bryant in was his Achilles heel. If his death has any relevance at all to our situation in Iraq, that might be it.