So we have come to cash this check.

I just got home from nearly three weeks abroad. Waiting for me in the mail: final judgment in my favor on my Superior Court appeal against Bedminister Municipal Court. But the case is not over.

I paid a $200 fine in a conviction that has now been vacated, but getting the money back is not automatic. I have to apply for it. I will fight to get it, even if I have to pay more than $200 in the process.

I assume that the points adduced against my driver’s license will automatically be wiped clean, but that isn’t certain. So I’ll have to check, not that I really know where to begin.

I’d wanted to discuss (i.e., brag about) the details of the decision here on my blog, but I can’t: the decision is not for publication without prior approval of the “Committee on Publications.” So I will have to ask permission for the right to discuss a court decision that I have in my hand because it was mailed to my house. I intend to get permission, even though I don’t think I should have to. 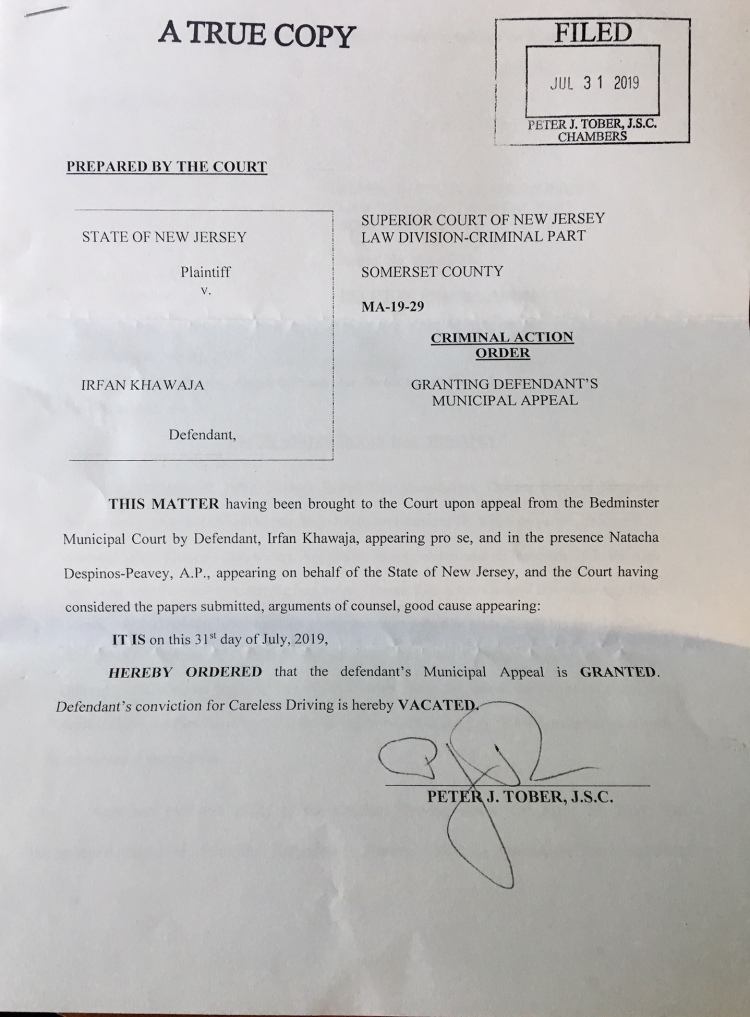 Though decided in my favor, the court decision contains some factual mistakes, at least one of them material to the case. It misstates my vehicle’s direction of travel (minor and immaterial, but an annoying mistake that’s dogged the case from the beginning), and also misstates what the state trooper who stopped me claimed as reasonable suspicion for the stop (a major and material issue). I intend to discuss both things on my blog (and more), once I win the right to speak freely about them.

Finally, though decided in my favor, the court’s decision does not comment on the evidence in the record for what I regard as the most plausible and problematic explanation for the whole stop: that the trooper bullshitted his way through the whole case from beginning to end. I wouldn’t expect a Superior Court judge to put things that way, but that wouldn’t stop me from doing so.

In other words, the decision, as written, downplays evidence in favor of the following very real possibility: the trooper who stopped me lacked reason to stop me at all, and then, confronted with my refusal to cooperate with him, made things up as he went along, issuing a ticket based on what I regard as a whole-cloth fabrication (or series of them). Having done so, he repeated some of this BS in his testimony at trial. The municipal court judge hearing the case–an individual specializing primarily in family law–heard his testimony, realized how weak it was, then took the initiative to supply her own “evidence” against me  simply to patch up the holes in the State’s case, misrepresenting the law along the way. As a substantive matter, the evidence she gave was insufficient and incoherent; as a procedural matter, it was not hers to give. None of that stopped her from giving it, and none of it stopped her from convicting me. That, at any rate, is my version of the facts.

The good news is that prosecutors at the Superior Court level were so embarrassed by all this that they decided to dismiss the case against me. The Superior Court judge agreed. But had I not pursued the appeal, every miscarriage of justice involved would have become an official part of the record, and been enforced by law.

But forget the particularities of my case. Here’s the larger point: things like this happen every day, dozens of times a day, in every municipal court in the land. And they happen more often than that in a large number of vehicle stops made on every roadway (and some driveways and parking lots) in the land. Huge numbers of traffic cases, along with misdemeanor and petty disorderly persons cases, give the appearance of serving some legitimate “law and order” purpose but are really just legalized and legalistic mumbo-jumbo tied to revenue-generating schemes. Such schemes are themselves driven not only by law enforcement agencies but by the kind of upstanding citizen who demands “government services” without wanting to pay for them.

But don’t take my word for it. For details and documentation, read Alexandra Natapoff’s Punishment without Crime, Charles Epp’s Pulled Over, or the Department of Justice’s report on the criminal justice system in Ferguson, Missouri (105 page PDF). Or just spend some time, as I have, watching municipal court cases in person. If you do, you may come to the conclusion, as I have, that while “the bank of justice” isn’t quite bankrupt, it’s getting there as fast as it can. 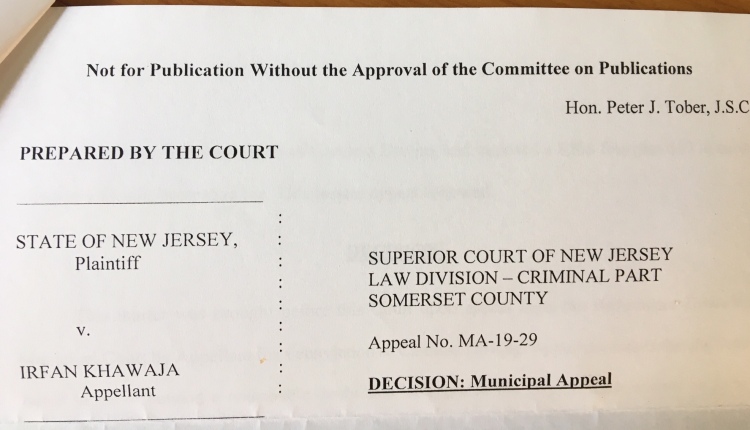 It’s also worth remembering that for undocumented aliens, convictions in traffic (and related) cases can become grounds for deportation and can by implication lead to incarceration, bankruptcy, and family dissolution (read this for a more nuanced description of the legal situation). ICE agents wait around (sometimes near the courthouse itself) like birds of prey, obscenely eager to swoop down on those convicted in such cases. I’m a U.S. citizen with money and a Ph.D.: three lucky charms in my favor. A poor, less educated undocumented alien might well have been put into deportation proceedings six months ago, and probably would have been deported by now. Let that sink in.

(1) If you’re innocent, take your defense to the maximum. Don’t stop defending yourself until you really lack the means to proceed. And don’t give the State an inch, whether out of complacency or magnanimity. Play every single card you have. And don’t play the plea bargaining game. Decide whether you think there is evidence beyond a reasonable doubt of the charge brought against you. If not, contest it, and play to win.

(2) If possible, hire counsel; only go pro se as a last resort. I hired counsel for the trial, but for lack of funds, reluctantly had to go pro se on the appeal. (While I’m offering advice: be wealthy enough to be able to spend money on defense attorneys without having to count the cost.) I regret that I was a bit hasty in the counsel I hired. On the plus side, I give my lawyer credit for helping me lay the groundwork for my appeal, but on the minus side, I’m convinced that a more aggressive lawyer would have saved me the trouble of having to file an appeal in the first place. I was a little more anxious to hire a lawyer than I was to hire the right one. But it’s hard to know who the right one will be. You live and learn.

(3) Don’t expect official documents–police reports, court transcripts, court decisions–to be factually accurate simply because they’re official documents with an impressive-looking seal at the top. Officialdom has a lot of trouble getting the facts straight, even in the simplest case.

(4) If this is the best-case scenario in an extremely obvious and essentially trivial case (and it is), ratchet back your expectations for any other kind of case. In particular, before calling for a law to regulate this or that terrible thing in the world, ask yourself what it would take for a 100% innocent defendant to defend herself against a false charge of violation of that law, especially if she didn’t have the money to hire a top-notch attorney, and/or didn’t have the education to engage in pro se litigation.

What you’re asking such people to do is to surrender their rights, sacrifice their reputations, and pay fines and/or go to jail and/or be deported because you feel, “out of the best of intentions,” that “there oughta be a law.” Where there oughta be a law, there oughta be a viable, accessible defense against it. If you’re not interested in thinking about how to mount a legal defense against a false charge of violation, you shouldn’t be thinking about imposing a law. To that extent, at least, I’m an unapologetic advocate of deregulation.

My modest deregulatory message to the State? To paraphrase Patrick Henry, give me the means to defend myself–or drop dead. And while you’re at it, send my refund check to the address you have on file. As it happens, I’m thinking of putting the $200 the State owes me in a personal legal defense fund for the next time I have to defend myself in court. Because I know there’ll be a next time–and I’d hate to lose my next case for insufficient funds to mount a defense. The arc of the universe bends toward justice, but only upon payment for services rendered.