So I’ve been here for about a month now, and have another month or so to spend in the country (or these countries, or this country and a half). As I reflect on what I’ve seen and done so far, however, I can’t help feeling a sense of dissatisfaction at myself: I really need to get out more.

In the month that I’ve been here, I’ve mostly stayed in and around Abu Dis. I’ve walked all around Abu Dis and Eizariyah, and gotten a fairly good sense of the place; I’ve also taken a foray into the nearby desert between Abu Dis and Ma’ale Adumim, strolling among the Bedouin encampments in the notorious E1 zone–until I was accosted by a xenophobic sheepdog who decided that I lacked the credentials to cross his canine checkpoint. (So far, I’ve had better luck at human checkpoints.)

As I was saying, the jaunt I took was in E1–the so-called “Judean Wilderness.” When you first walk into the “desert” there, it seems uninhabited–so obviously uninhabited that you could be forgiven for thinking that you’ve come upon a land without a people. But then you look more closely, and you see the first signs of habitation, followed by the second, and the third–so that after an hour or so, you realize that what had previously seemed “uninhabited” is not just inhabited, but in some sense entirely appropriated. In fact, one of the first things I ran into when I got to the desert was…a fence preventing me from going any further into the desert, or rather, requiring me to go around it if I wanted to go anywhere at all.

Here’s one of the earliest indications of habitation. I’d been walking for a bit when I came on these shepherd’s shanties by the side of the road.

I take it that they’re just temporary shelters to keep the shepherds out of the sun (obviously, there’s no shade for miles). They own those, right? It’d be trespassing to use them without the owner’s consent, and something like theft to destroy or bulldoze them without the owner’s consent. Maybe morally, but not by law. Legally, none of this property has any valid status; it’s all illegal.

If you look to the left, there’s a big valley with a sort of shantytown nestled within and a village on the mountaintop.

The mountaintop is (just barely) on the electric grid, but the shantytown is not. So what do these people own? The clothes on their back? That plus the shanties over their heads? The mountain? That plus the valley? Does that include the roads you see and the reservoir as well? Could they legitimately say that they own all that the eye can survey? And whose eyes would those be–Israeli, PA, or Bedouin? These people are living “illegally,” as well; in fact, their whole existence is illegal.

How to conceptualize property claims of this kind is a major undertaking for which I so far lack the conceptual apparatus, the relevant information, and any fine-grained answers. The Israeli government regards these Bedouins as living “illegally” on state land in Area C (under full Israeli control), and intends to move them elsewhere to build Jewish settlements here (whether the Bedouin like it or not). The Israeli government is offering the Bedouins compensation, and has suggested (as a justification for expropriation) that the structures the Bedouins have built aren’t up to code. How you think about that turns on how you think about natural rights of property, initial appropriation and its limits, the status of a nomadic lifestyle in a modern state, the moral status of “state land,” the imperatives of economic development, and paternalistic regulation. (For defenses of the Israel point of view, see this and this, both PDFs. For the Bedouins’ own perspective, see this. Here’s more from Architects and Planners for Justice in Palestine. Here’s a small portion of B’Tselem’s reporting.)

It’s a lot to think about, and part of the reason I find it hard to leave my immediate environs is that I find that those environs by themslves give me more than enough to think about–more, in fact, than I can handle. I sympathize with the plight of these Bedouins, but the status of their claims is not clear to me. After all, it’s not clear to me that if a bunch of Bedouins showed up in north Jersey, they’d be able to appropriate whole mountains and valleys of this size for their own use, exclusive of the development needs of neighboring towns or any other claims. What would happen to them if they tried is anyone’s guess (try to imagine it happening in Sussex County or in the Pine Barrens)–though a hard look at the remote origins of our Indian reservations suggests one possible answer. That’s not a moral judgment; it’s just an observation in need of a moral judgment by a mind better stocked with answers than mine.

Here’s a shot looking into the distance at the northeastern horizon.

What you see in the distance is Ma’ale Adumim, a Jewish settlement about the size of my hometown of West Orange, New Jersey (and which actually looks a lot like West Orange). The road that snakes through the picture goes to Ma’ale Adumim and by a roundabout route to Jerusalem.

So what do they own? As it happens, Ma’ale Adumim is often described as having been built on expropriated Arab land. If the settlement’s development needs encroach on this valley, whose claims, morally speaking, have prior or overriding consideration? If the Jerusalem Municipality’s Master Plan calls for the incorporation of all this “unused land” into an integrated plan for a Greater Jerusalem, what basis, moral or legal, would these stateless quasi-nomads have for disputing the claims of modern, metropolitan citizens of a functioning state? Whatever the answer, I haven’t encountered anything in the philosophical literature that deals with it in a way that does justice either to the complexity of the issues involved or the urgency of what’s at stake here. (If anyone has bibliographical recommendations, I’d love to hear them.)

We take “civilized” life for granted, and usually take for granted that the displacements it required took place in some distant and morally irrelevant past. But a look at E1 and similar places here suggests that that isn’t so. The displacements are happening now, and happening in the name of the imperatives of civilized life. One of the (many) things that gives the Arab-Israeli dispute its urgency for Americans is the way in which it re-enacts the worst (and most tragically forgotten) aspects of our own history, when we were the Israelis, and our adversaries were the Palestinians. The displacement of the Bedouins in E1 sounds uncomfortably like a 21st century version of the Trail of Tears. It sounds that way, but is it? A complex question in need of an answer that I don’t have. 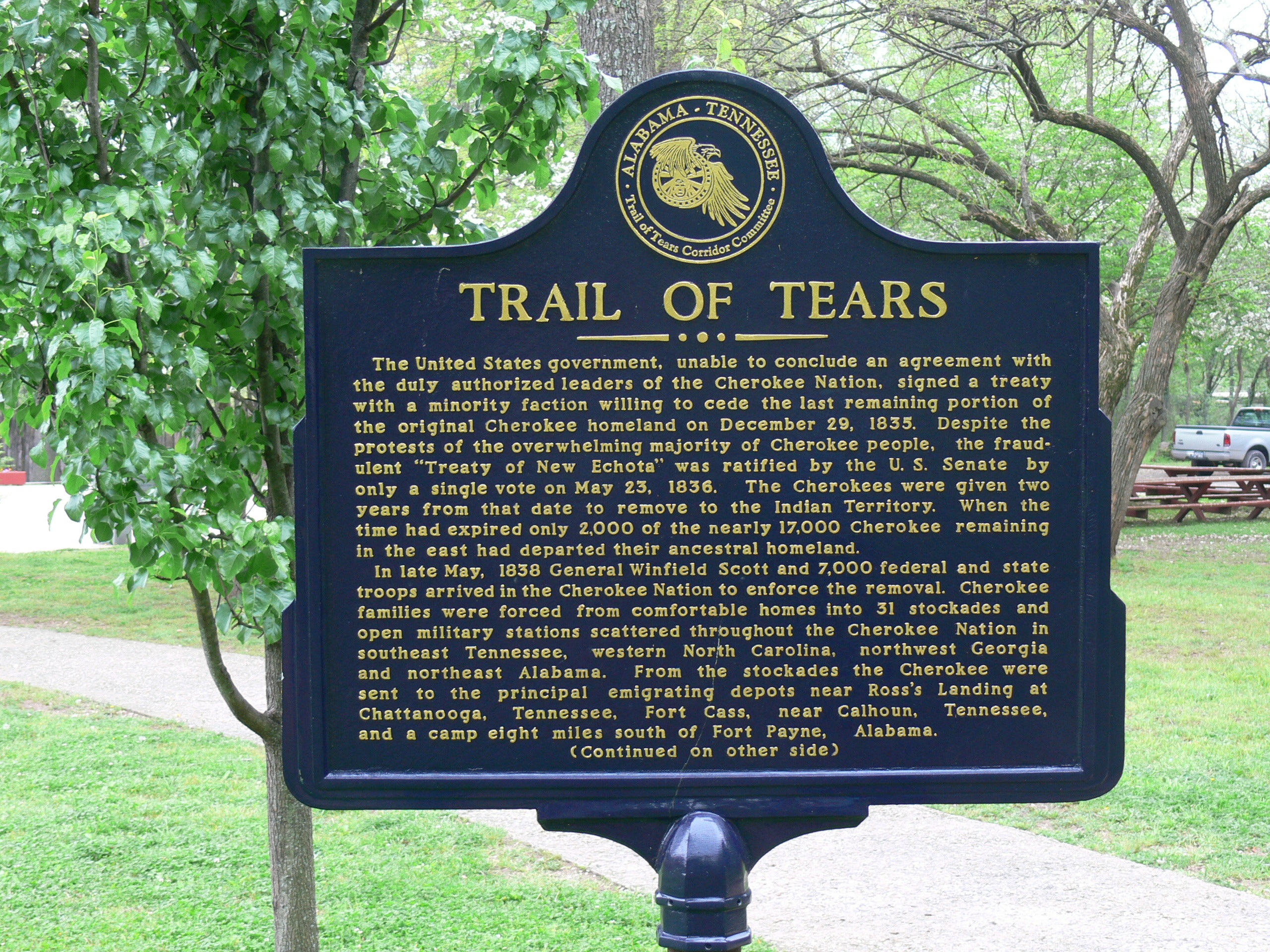 Don’t worry; this happened a long time ago.*

Anyway, I started out by saying that I need to get out more, and I do. I’ve gotten a great deal out of teaching my political philosophy class–we’re currently finishing up Machiavelli’s Prince–and I was right to think that my Occupation-based approach to the classic texts of European political philosophy would pay the hermeneutical dividends I anticipated. I’ve also gotten a fairly good sense of the rhythms and details of life in my immediate vicinity, and made a couple of trips to Jerusalem and Ramallah.

But my activities all seem distressingly parochial. I’m uncomfortably reminded of a passage from Mill’s On Liberty:

In the case of any person whose judgment is really deserving of confidence, how has it become so? …Because he has felt that the only way in which a human being can approach to knowing the whole of a subject is by hearing what can be said about it by persons of every variety of opinion, and studying all modes in which it can be looked at by every character of mind.

I haven’t really done that. I’m ensconced here among Palestinians in a cocoon of Palestinian political and religious opinion. Everyone here is opposed to the occupation and to the settlements–in a fundamental way, to Israel itself.

So the time has come, I think, to hang out with some Israeli settlers. To that end, I’ve made arrangements over the next few weeks to meet one set of settlers through this tour; another through this one; and to visit Ma’ale Adumim through this program. (Here’s a description from 2010; here’s one from a few days ago focusing on East Jerusalem rather than Ma’ale Adumim.) The second of these tours will enable me to visit the Temple Mount/Haram Sharif in the company of Jewish settlers, something I never imagined myself doing before, and which fills me with a peculiar mixture of apprehension and amusement.

I’ll be visiting Hebron through this tour, and spending time in a Bedouin village in the Negev on this one; though the description of the Hebron tour doesn’t say much about interacting with settlers there, I’d like to see how far I can get in the direction of interaction with them. Though I’m not totally sure I can schedule it, I’m hoping to spend a couple days re-visiting the village of Beit Umar through this program; I had an “interesting” exchange with an Israeli military patrol last time I was there, and I’m hoping that I can meet my old “comrades” in that unit once again and re-start the argument where we left it two years ago.

I’m curious what PoT readers are curious about. Any questions you think I ought to be asking, or things I ought to be looking for? Tell me.

*”The Treaty of New Echota was ratified by a single vote…” Recall the old axiom, care of Anthony Downs, that a single vote almost never alters the outcome of an election in a politically significant way. “In a large election, the probability that an individual vote might change the election outcome is vanishingly small.” Almost, vanishingly small: sometimes the odds get even.

Postscript, July 19, 2015. Here’s a useful map depicting the places described in this post. (It’s a PDF; unfortunately, I can’t copy and paste it.) I took the long road that starts from the “b” in Abu Dis, and took it past Sawahrah as-Sharqiyah, bypassing Container Checkpoint, and doing a half-perimeter of what’s marked “the alternate site” in E1. The map indicates that all of the land I photographed, though physically inhabited by Bedouins, is within the municipal boundaries or Regional Council jurisdictional area of the surrounding Jewish settlements (either Ma’ale Adumim or Qedar). The realization of the E1 plan would require the expropriation of all of the Bedouin encampments located within the blue space on the map.

It’s an interesting question what moral justification anyone could have for doing this. Even if you argue that Bedouin appropriation of land has to be limited by some version of a Lockean Proviso, it’s unclear how the surrounding settlements could be entitled on the same grounds not only to what they currently have but to everything that the Bedouin have–despite the fact that the Bedouin are on the land, and the settlers are not.  Though I haven’t read as much of it as I should, I get the impression that libertarian discussions of property are, in their current form, ill-equipped to adjudicate disputes of this sort. Likewise Lockean discussions. It’s unclear to me whether Lockean/libertarian accounts can be developed into adjudication-worthy theories, or whether they have to be junked in favor of something different, and more adequate to the task.

Postscript, July 20, 2015: This article from Reuters is exceptionally informative on the plight of the Bedouin in E1.

Postscript, July 24, 2015: Another informative article, this one on the hamlet of Susiya in the southern West Bank.

2 thoughts on “Postcards from Abu Dis (8): From Settlements to Unsettlement”