So I decided today, in defiance of common sense, to walk from Abu Dis to Jerusalem. I mean, I can see the Mount of Olives from my kitchen window, so how hard could it be to get there? Seeing is believing. Kind friends showed me the way there en route to a nearby restaurant a few days ago, albeit from the comfort of their car. It all seemed simple enough. You take the short cut from Abu Dis to Eizariyah, take Route 417 down to the Khatib Bakery shop, take the road after it, and walk up the road to Har Hazeitim* Checkpoint and into Jerusalem. Easy!

You forget that the holy land is not just holy, but hilly. Yes, Jesus preached the Sermon on the Mount, but we tend to remember the sermon at the expense of the mount. And now I get why Jesus didn’t walk to Jerusalem on Palm Sunday. I really get it: one mile of walking up a 45 degree slope in 80-something degree heat from Abu Dis to Eizariyah, and I begin to think that this whole “walk to Jerusalem” thing is a really bad idea. (I could at this point too easily resort to an “ass” joke, but I’ll spare you.)

So I get to the town of Eizariyah, and the time comes to put those directions to use. You know, the directions my friends gave me while driving through this town? So here I am on Route 417. Now, I seem to remember them saying that the turn-off to Har Hazeitim Checkpoint is after Khatib Sweets and Bakery on this road. Khatib Sweets. And Bakery. After it. It seemed so clear at the time.

I get to Khatib Sweets and Bakery, and wouldn’t you know it, there are two roads after it. Two roads diverged in Eizariyah after Khatib Bakery, and I–I cannot figure out what “after” means in this context. Right after? Somewhat after? Which has the better claim?

Whatever “after” means, I get it wrong: right direction, wrong turn-off, wrong destination. I end up at a checkpoint, all right. But it’s closed. And it’s not called “Har Hazeitim” (or, for that matter, Herzliyah).* I don’t know what it’s called, but it’s ugly as sin, covered with trash, and totally abandoned.

I keep walking a few miles up and down the hills of Eizariyah, feeling like death itself.  “Jesus,” I think. “Get me out of this.” 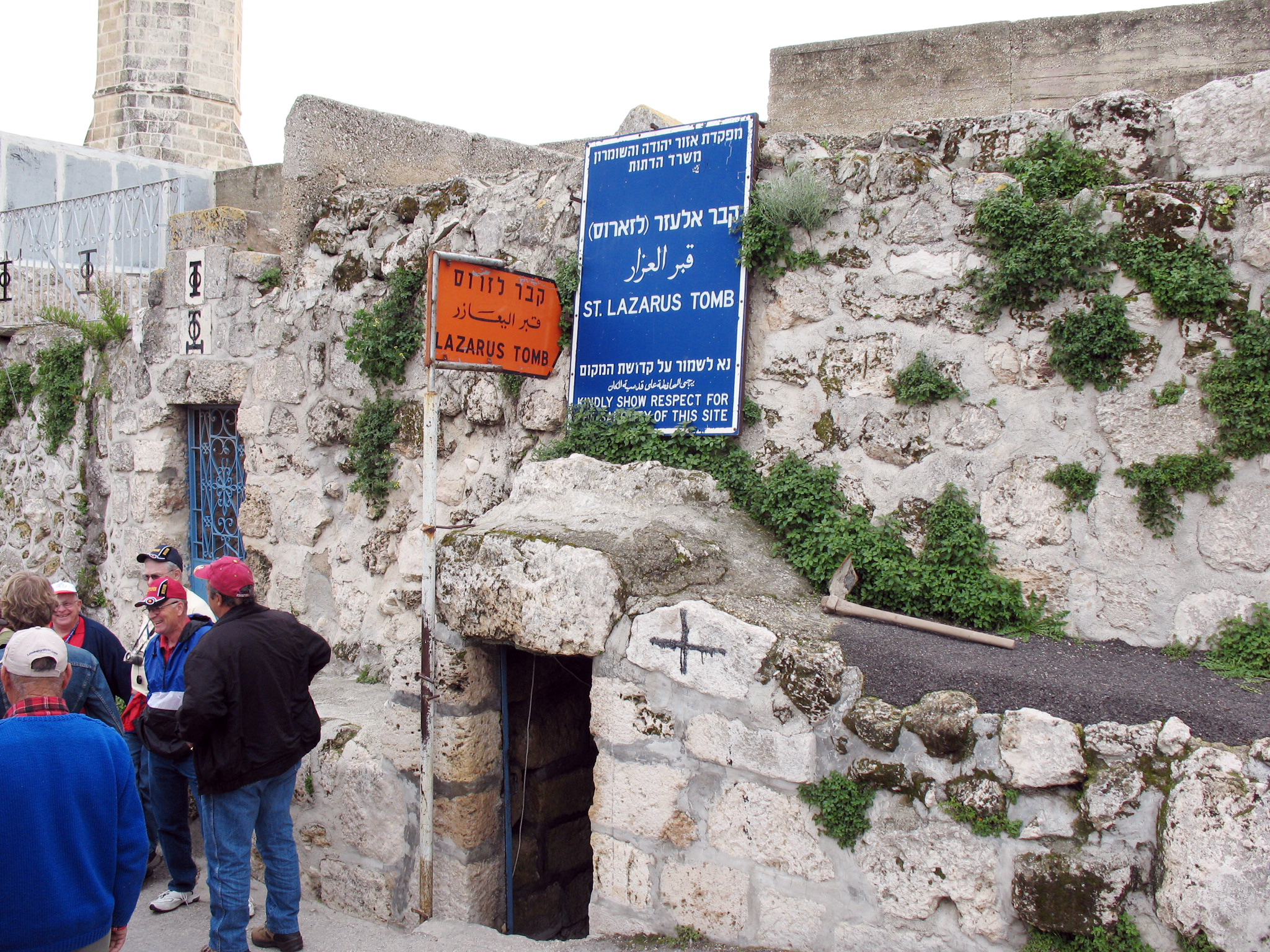 I look up. It’s the Tomb of Lazarus. I take a random left turn. Hey, there’s the bus stop. I pay the fare. It’s eight shekels. I have exact change. I get to Jerusalem.

*Postscript, June 17, 2015: Not only did a screw up my friends’ directions, but I got the name of the checkpoint wrong in the original post (I had originally written “Herzliyah Checkpoint”). I’ve fixed it now. Of course, for purposes of the post, this piece of revisionist history erases the fact that I not only misremembered my friends’ directions, but misremembered the name of the checkpoint that was central to the directions.

My friend Awad Mansour informs me that the abandoned “checkpoint” I describe in the post is actually a large gate that (years ago) used to be opened at times to allow schoolchildren back home from school in Jerusalem. Apparently, it’s been the scene of clashes with the Israeli army–including some particularly intense ones this past fall.

Incidentally, I’m glad I didn’t head toward the “Herzliyah checkpoint” (or more precisely the “Herzliyah Marina Checkpoint“), because unsurprisingly, it turns out to be in…well, Herzliyah, on the Mediterranean coast, on the other side of the country. I’m not sure what miracle would have helped me there–except, perhaps, the one that gave the scarecrow a brain in “The Wizard of Oz.”

Postscript, June 24, 2015: With the help of Wikipedia, a bit of OCD, and some help from my friends, I’ve figured out what I did wrong. See the yellow road that stretches somewhat horizonally across the page underneath the words “Abu Dis”? That’s not the road I took. But if you look at the “s” of “Abu Dis,” you’ll see a sort of vertical white road that heads to Eizariyah. That’s the “short cut” I mention in the post. If you take it to Route 417, there’s a roundabout there, probably not visible on this map. I got lost in those squiggly white lines (roads) and kept knocking into the purple thing (the wall). But see how only one of those roads crosses over the blue and white line into the city? That was the road not taken.

You can’t see Lazarus’s Tomb, but I walked down from it to Route 417 and walked over to the red sign with the horizontal white stripe through it. That’s the bus stop at the wall (in purple). The bus then takes 417 in the opposite direction, through Eizariyah, Jahalin, Ma’ale Adumim, to Route 1, and into the city via the checkpoint at Adumim Interchange (where we were ordered to stop and our documents were inspected). Whether the further route continued via Sawaneh, Wadi Joz, or Sheikh Jarrah, I don’t remember (will pay closer attention next time I go). But whichever it is, it’s a pretty circuitous route, and would obviously be much shorter if it went through the Mount of Olives via 417 heading northwest.

3 thoughts on “Postcards from Abu Dis (4): A Land of Miracles”