I’m not much of a sports fan, and haven’t been for awhile, but as a kid in the 70s, I had three sports idols. One of them was Reggie Jackson. The second was Muhammad Ali. The third, my personal favorite, passed away yesterday: Pelé, aka, Edson Arantes do Nascimento. I can’t equal the poetic eulogy published for him yesterday by the Brazilian writer José Miguel Wisnik, and won’t try. I’ll simply echo Wisnik’s sentiments:

A poet once remarked that Pelé seemed to drag the field with him toward the opposing goal, like an extension of his own skin. A philosopher conceded, playfully, the possibility of glimpsing flickers of the Absolute in him. The beauty and intelligence of his body in action, plus his eagle eye and the unpredictability of his tricks, made Pelé appear to be operating on a different frequency from the other players, watching in slow motion the same game he was participating in at high speed, while others around him seemed to be doing the reverse. 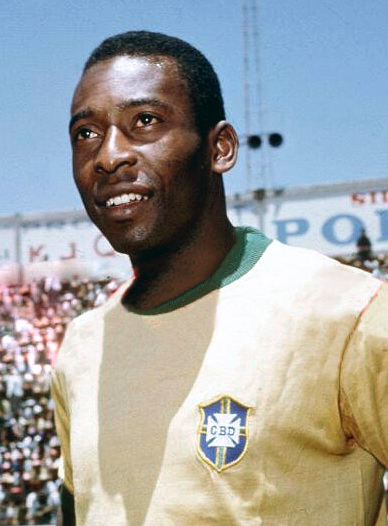 I saw Pelé twice in person, playing for the Cosmos at what was then called Giants Stadium in New Jersey. Watching him play, I didn’t so much want to play soccer like him as live my life the way he played soccer. Having read in a biography that he went everywhere dribbling a soccer ball for practice, I decided to imitate him as literally as possible, pretentiously dribbling a ball around town while hanging out with my friends, going out to eat, doing errands, etc., all in the mythological belief that doing so would give me Pelé-like skills of ball control on the soccer field.

It didn’t, but it eventually taught me something else worth learning: Every now and then, life itself demands that you dribble the equivalent of a soccer ball in some incongruous place, adhering to the arbitrary rule that you not touch it with your hands even when doing so might make things a whole lot easier. Granted, in doing so, you’re not going to drag the world to you like an extension of your own skin, or give people glimpses of the Absolute. It’ll be good enough that you not lose complete control over the ball, hit someone with it, or get yourself killed while dribbling it across the street. Sad but true: The world isn’t a soccer field, and few of us have Pelé-level ball control skills, so that’s as close to Pelé-hood as we’ll ever get. But when you consider the exemplar, approximation is nothing to be scorned.

Pelé was a unique combination of superhuman talent and fully human decency. I don’t expect to encounter anyone like him again, but I’m grateful to have encountered him, in some sense of the word, when he was around to be encountered. RIP.