Thy love afar is spite at home.

The United States is currently sending billions of dollars in military assistance to Ukraine, prolonging the war there, and increasing the probability of escalation or even nuclear war, for a country that has zero bearing on our own national security. Our security was not threatened when Ukraine was a part of either the Soviet Union or the Russian Federation, and was not appreciably enhanced by Ukraine’s exit from the latter. None of this seems to figure in the calculations of those in favor of US intervention: intervention is for them an imperative, however inscrutable the reasons for it.

Meanwhile, security experts tell us that nearby Haiti is descending into chaos, possibly civil war, threatening a catastrophic influx of refugees to our shores. According to these experts, only foreign troops (meaning foreign to Haiti) can bring order to the country and save the day. And (these same experts claim) the number of troops required for the mission is relatively modest. Granted, the challenges they face may not be.

What, in this context, is the policy of the United States? It’s to beg the Canadians and the Brazilians to intervene in Haiti on our behalf. Is this because Canada or Brazil face any particular ramifications from civil war in Haiti that we don’t? No, it’s because Americans are too sick of war to want directly to engage in it, but too addicted to war to stop waging it.

But why Canada and Brazil in particular? Maybe because Brazil and Canada are our true allies, and a true ally of the United States is the kind of country that invades other countries and occupies them for their own good. Maybe also desperation. The UN’s track record at peacekeeping–cholera, sexual abuse, plain old failure–leaves something to be desired. It’s not as though we could have asked Mexico, the Dominican Republic, Nicaragua, or Cuba to do the job for us. And many of our allies are busy fighting other wars, or have populations of their own to suppress. The ideal candidate for the job of Haitian occupation would be big, continentally American, and a trading partner subject to economic leverage. So Canada and Brazil it is. 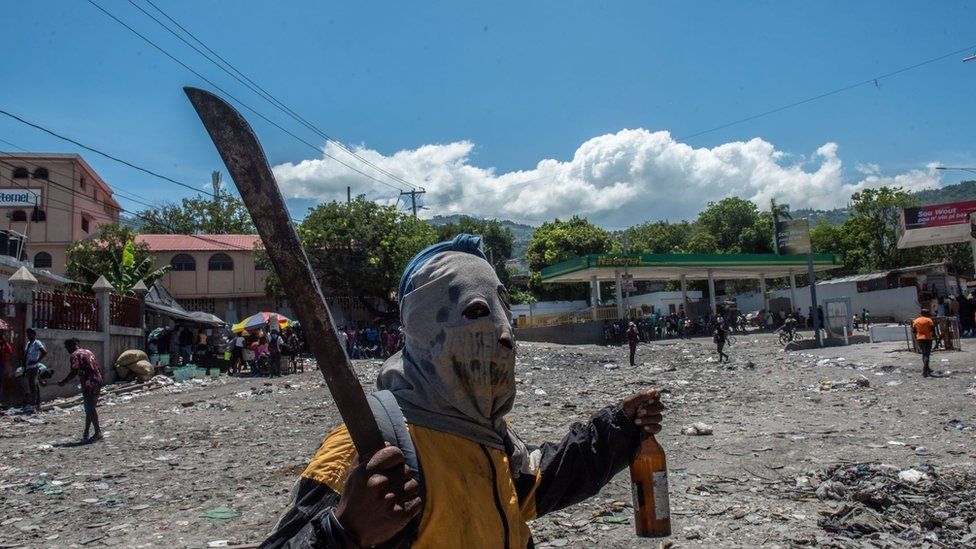 I have no idea whether our security experts are right about Haiti, and am not proposing that we follow their advice. I simply make this observation: of the two places where military intervention has been proposed, Haiti differs from Ukraine in one salient respect. Whether intervention is justified in Haiti or not, its rationale, at least, is clear enough to state in a sentence and clear enough to grasp in a thought. If an influx of refugees is a catastrophe on the scale these experts are predicting, and it directly affects us, and  can only be averted by military action, then insofar as it averts those costs, military action is justified.

The word “insofar” is, of course, the tip that conceals an iceberg of ignorance. How far is “insofar”? It’s hard to know. By definition, experts claim to know, but by definition, claiming is easier than proving. Philistine as this may sound, I’m skeptical that the cost-benefit calculation our experts are proposing will be borne out by fact. Warfare always disappoints. Yes, the argument for intervention in Haiti has  intelligibility in its favor, which is more than can be said, in my opinion, of the one in Ukraine. But personally, I would need more than mere intelligibility to get my ass shot off in some foreign country (in any country, really)–a form of tender solicitude for myself that I extend by courtesy to our men and women in uniform. I don’t think they should get their asses shot off that easily, either.

One last thing. I can’t help noting the stark difference in media coverage regarding the two places. Ukraine, remote both geographically and historically from the United States, has somehow captured the hearts and minds of the American people. Haiti, proximate in both ways, has not. An unkind person might invoke a racial explanation for this rather odd distribution of attention. Being the kindly sort of person I am, I seek a different explanation–insofar as I can find one. How far that is, is anyone’s guess, including mine. The fog of war is never limited to the battlefield.