I’m inclined to rant today. As readers have probably figured out, that doesn’t really differentiate today from any other day, but still.

Today’s rant is about Catholic education. Let me preface it by saying that I like Catholic education. I got my Ph.D. at Notre Dame. I’ve spent the last twelve years teaching at a Catholic-Franciscan university, “The Franciscan University of New Jersey,” no less. I just got a paper accepted at a conference at Sacred Heart University on the “Catholic intellectual tradition” wherein I defend the pedagogical legacy of Cardinal Newman. I teach the Catechism of the Catholic Church in my ethics classes. Some of my best friends are members of the Knights of Columbus.

Not bad for a heathen, but I can’t help thinking that there’s something about Catholic education that distinctively predisposes it to a kind of truculent, self-perpetuating hostility to reason. That sounds bad, I know. But here I sit; I can type no other. 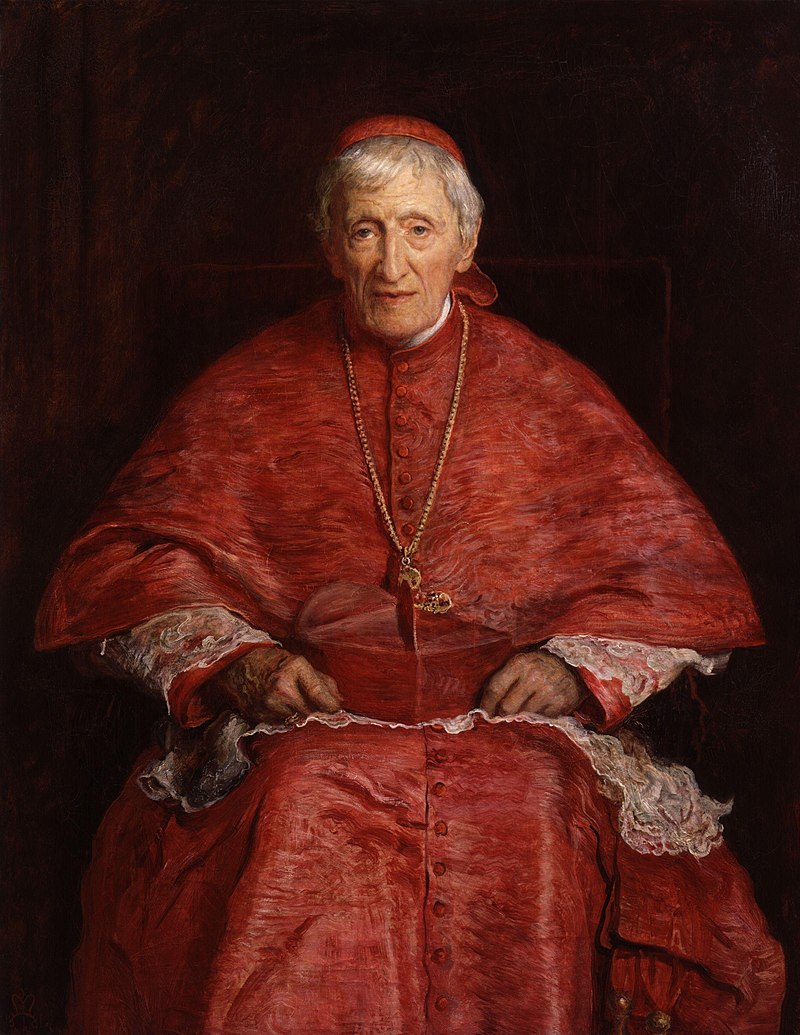 Cardinal Newman, a little nonplussed by my argument

Consider a small but revealing example: the standard-issue Catholic schoolgirl’s uniform—white blouse, sweater, plaid skirt, knee socks, saddle shoes. I don’t know whether it’s literally required by such schools’ dress codes, but in a somewhat weaker sense, it clearly is de rigueur in Catholic schools. My university stands next to a Catholic girls’ high school, some of whose students attend classes on our campus. The vast majority of these students wear this uniform with no apparent consciousness of its overwhelming ridiculousness. But I’m here to tell them.

It is, first of all, twenty degrees Fahrenheit outside with a windchill that pushes the temperature into the single digits. What sane person wears a skirt in such weather? Only one who’s been induced or coerced into doing so by her less-than-sane Catholic elders. Hard to imagine that anyone would do it entirely of her own accord.

And why–to continue my catechism of impiety–would such elders insist on such a uniform? The only answer I can think of is to insist by sartorial decree on a rigid, reactionary sense of gender differentiation. To wit:

There seems no discursive space in the Catholic milieu I inhabit to ask the obvious question: why? Is any of this really necessary?

There’s one last aspect to this topic—unsavory yet unavoidable. It’s common knowledge to everyone outside of the world of Catholic education that “The Catholic Schoolgirl” is a kind of cliched sexual trope—a fetish, to be blunt, served up to sex-starved perverts acting out their Lolita fantasies. You don’t need to venture into unsavory or exotic places to figure this out, by the way. You can look it up, as I did, on Wikipedia.

A schoolgirl uniform fetish is a sexual fetish in which someone derives sexual pleasure from viewing others dressed in the typical uniform of a schoolgirl (with either a school skirt or culottes), or from themselves dressing in that manner.

Who knew? But after such knowledge, what forgiveness? You’d think that parents and educators so otherwise solicitous of their wards’ virtue—their chastity and modesty—would figure this out, and grasp that the uniform probably does a better job at objectifying their daughters and students than would the slovenly sweatshirts and sweatpants they’d be wearing if left to their own devices. But no: self-deception must reign forever and ever. Wikipedia, again:

The stated purpose of uniforms, often set forth in school uniform policies, include reducing clothing expenditures for parents as well as avoiding distinctions among children based on whose parents can afford to buy them fashionable clothing to wear to school. The school attire is also said to reduce distractions and help with student identification, ensuring that a stranger will stand out among the uniformed students.

Please. The year is 2019, AD. Who at this late date can bring themselves to believe any of this?

Hearken to the words of the Lord:

That goes for Catholic schoolgirls’ uniforms, too. Let us break their bands asunder, and cast away their cords from us. Put another way: free your mind, the rest will follow–assuming you want it to. The biggest problem with far too much of Catholic education today is that it’s not clear that they do.