A couple of days ago, my Facebook friend Gary Chartier posted this article from USA Today on increasing speed limits on American highways. As it happens, I’m at work on a paper on a traffic-related blog post I wrote here a few months ago, to the effect that police tailgating ought to be regarded as a form of legal entrapment. To that end, I’ve been reading a lot about cars, roads, road safety, traffic, tailgating, police chases, and entrapment. Research aside, I happen to be an unapologetic traffic-ethics bigot inclined to the view that when it comes to driving, it’s my way or the highway. So naturally, I leapt at the chance to pontificate on Gary’s post.

Incredibly, Nathan Byrd, another of Gary’s FB friends, had the audacity to question my claims right there on Facebook.

I’m unclear what you’re proposing if it seems that the results are better overall.

A related point for surface street driving is that removing lights and putting in more roundabouts and other street formations that give a higher sense of threat seem to keep people alert and thus less likely to get into an accident. Would you similarly disapprove of that kind of change?

I wasn’t so much proposing as remarking on a trade-off and an ambivalence: you can in principle get lower mortality by the judicious use of vigilance-inducing fear, both with higher speed limits and with roundabouts as you say, but it’s not obviously justified to reach a favorable public policy outcome by threatening innocent people, i.e., deliberately, intentionally subjecting them to life-threatening threats. With a day’s reflection (I went through the notorious Somerville Circle last night, in Somerville, NJ) I guess I would say that I disapprove of both changes. It isn’t just that higher limits and roundabouts “give a higher sense of threat.” They deliberately subject people to life- threatening conditions, then regard lower mortality rates as a justification for doing so. I think that procedure violates rights. It basically involves assaulting people in order to keep them vigilant. So it seems a case of doing injustice so that a good outcome may come. But the injustice is a bad outcome of its own.

Though roundabouts generally have lower accident rates than intersections, certain major exceptions are worth noting. Even if the accident rate was low, there is no conceivable way to drive through this circle if you don’t know exactly what to do at each micro-second of your trip through it.

It’s a complex issue. I just wondered what you had in mind a bit more, so thanks for explaining.

I’ve also heard that seatbelts and other kinds of safety features that make safety obvious to the driver prompt them to compensate for this by driving in a riskier fashion, and generally that tends to go past the tradeoff point and put them in more danger than they were prior to the safety features being added.

I hear what you’re saying about the ethical implications, but I’m not entirely convinced for a couple reasons.

I don’t know that roadways have an inherent safety/danger level prior to drivers interacting with them. Or at least, it’s not entirely pre-determined, and except in extreme cases, it’s going to have a wide variability across the population of drivers.

Polls have shown that the vast vast majority of drivers believe that they are better than average in driving skill. This is not exactly Dunning-Kruger levels of deception, but it does mean that driver perception plays a big role, even when road designers don’t especially care to influence it one way or the other. (I am one of the few who believes that I am less capable than most drivers, and that actually makes me a safer driver because I make effort to anticipate situations and not put myself in a position to have to rely on those skills.)

It would seem that if we convince someone that a situation is safe when it isn’t, or if it’s predictable that a person will change their behavior to a riskier one if we add extra assurance of safety, that has to be at least as ethically suspect as your concern. We seem to be caught in a no-win situation then where any roadway will necessitate widespread ethical violation. That doesn’t seem quite right somehow.

I would say, though, that I don’t think the purpose of the designs I’ve seen is to literally make things dangerous and then prompt drivers to correct for this error. It’s more a reflection of how human awareness functions and how easy it is for people to drive in a hypnotic state. So, providing a lot more opportunities for a response is helpful to driver awareness.

Think of the various rumble strips set in place on many large highways so that truckers have some prompting to wake up. That sound might be jarring if you’re not ready for it, but in most cases, that’s a very good thing, and I can’t imagine a trucker feeling slighted by it or feeling that their rights have been violated.

Probably a shorter way I could have said all this is that it seems that a certain level of transparency (and thus consent) is the best way to handle such a thing. I certainly don’t like the idea of manipulative road designers treating drivers as rats in a laboratory experiment. But I think that giving drivers extra stimulation while driving is far better ethically than a road that hums you to sleep. In either case, informing drivers of how things work would help reduce the sense of trickery or manipulation.

I don’t agree with that, but given the difficulties of having a conversation like this on Facebook, I invited Nathan to continue the conversation here, and he agreed. Of course, the ball is now in my court to respond. Hope to do so later this week with “Khawaja 3.” But feel free to join in.

Some relevant reading from Tom Vanderbilt’s classic, Traffic: Why We Drive the Way We Do (and What It Says About Us), pp. 178-79. 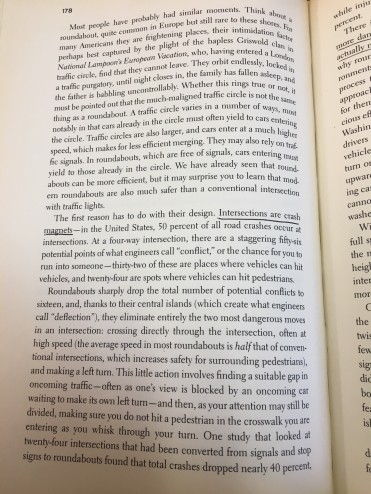 13 thoughts on “I Won’t Drive The Roundabout”