I’m reblogging this post I did last year, slightly modified.

Halloween has, for as long as I can remember, been the only holiday I’ve ever been able to take seriously or wholeheartedly to celebrate. As an ex-Muslim, I have a certain affection for Ramadan, but Ramadan isn’t really a holiday, and unfortunately, none of the Muslim holidays (the Eids) are seasonal, seasonality being an essential property of a real holiday. In fact, generally speaking, Muslims have trouble figuring out when exactly their holidays are supposed to take place–another liability of being a member of that faith.

Having spent a decade in a Jewish household, I have some affection for some of the Jewish holidays–Yom Kippur and Passover, though not Hannukah or Purim–but always with the mild alienation that accompanies the knowledge that a holiday is not one’s own: it’s hard to be inducted into a holiday tradition in your late 20s, as I was.

I like the general ambience of Christmastime, at least in the NY/NJ Metro Area, but unfortunately, once you take the Christ out of Christmas, you take much of the meaning out of it as well–Christmas without Midnight Mass being an anemic affair, and Midnight Mass without Christ being close to a contradiction in terms. Not being a Christian, I find it hard to put Christ back into Christmas, mostly because he’s not mine to put anywhere in the first place. (Same with Easter.)

The secular holidays are, I’m afraid, a sorry set of excuses for holidays. I’ve trashed Columbus Day on this blog (more than once), Independence Day on another, and I endorse Christopher Hitchens’s description of New Year’s Eve as the “worst night of the year” (and U2’s description of the Day as essentially unremarkable). Thanksgiving is too damn complicated, given its connection to family, and the political holidays (Presidents’ Day, MLK Day, Memorial Day, Veterans’ Day) are either too political, too contrived, and/or too somber to count as real holidays. Labor Day is a day off, not a holiday. It’s not the same thing.

So what’s left? The purest, most innocent, most seasonally appropriate, most nostalgic, and most celebratory of all holidays, Halloween.

I’ll concede this much: El dia de los muertos, All Saints’ Day, and All Souls’ Day are perfectly respectable cousin-holidays to Halloween and fit for post-Halloween celebrations, but their value supervenes on that of Halloween; in and of themselves, they don’t quite cut it, at least for me. (Scary thought: only a philosopher could manage to use the words “supervene” and “Halloween” in the same sentence.) What all four holidays have in common is a properly autumnal and properly macabre preoccupation with mortality, which is the only point of having a holiday in the first place. The point of a holiday is to celebrate life  in the shadow of death, in the full knowledge that it’s there, lurking in the shadows and crevices of life–and in the full knowledge that though it’s there, it doesn’t matter.

It’s a near tragic fact that Halloween itself almost went extinct. I have nostalgic memories of Halloween from childhood, but sometime in the mid-80s, Halloween’s luster was dimmed by a series of candy poisonings, razor-bladed apples, and other scares (or so we were led to believe); I distinctly remember when Halloween was cancelled–abolished, outlawed–in my town in the mid-80s. It took a long time for the holiday to recover from its de jure abolition, and  just as it seemed to have been doing so, it was cancelled two years in a row in the Metro Area for climatological reasons–for the freak snowstorm of 2011, and then for Hurricane Sandy in 2012. It made a comeback these past few years, and I’m hoping it makes a bigger one this year. All systems appear to be “go” for a comeback: Halloween falls on a Saturday this year; the weather is supposed to be perfect; and judging from the neighborhoods I’ve seen across north Jersey, everyone–infants, adults, and everyone in-between–is more than ready to celebrate.

Every holiday has an aesthetic, and needs artwork to match. In recent times, I’d nominate Tim Burton as the Master Artist of Halloween. Going further back in time, I might award that title to Bram Stoker, Mary Shelley, or Washington Irving.

Anyway, over the years I’ve been surprised to discover how many people–or at least, how many Americans between the ages of 20 and 50–have childhood  memories of listening to some version of Camille Saint-Saens’s little piece, “Danse Macabre,” around Halloween-time. I myself remember listening to a version of it playing over an animated “filmstrip” (remember those?) of dancing skeletons, care of my grade-school music teacher, Mrs. Davidson–to whom I’m eternally grateful. Unfortunately, I haven’t been able to find a video version of the filmstrip anywhere. That said, there are lots of versions of “Danse Macabre” online; I couldn’t quite find the perfect one, but this one had the right quirkiness about it.

For a more musically satisfying version of “Danse Macabre,” check out Clara Cernat and Thierry Huillet’s version for violin and piano.

This year’s Halloween art exhibit comes from Melissa Macalpin’s “Getting Ready for Halloween.” (I can’t seem to insert the artwork directly into the post. According to Melissa (sort of), “copyright is old-fashioned,” so if I could, I would.)

I don’t know what’s scarier–the music, or that I’m linking to it on what’s supposed to be a semi-serious, occasionally quasi-academic blog. Anyway, thanks to Vik Kapila for the suggestion.

By the way, don’t forget to vote in this crucial electoral race. Vote early and vote often, since the rules explicitly allow for it. Naturally, I cast several votes for AC/DC. I suggest you do the same. Or else.

Postscript, November 1, 2015: Well, another successful Halloween gone by. Conditions for it probably couldn’t have been better–Halloween on a bright October Saturday that turns gloomy as the day goes by, followed by an overcast All Saints’ Day falling on the Sunday when Daylight Savings Time ends.

My impressions of Halloween aren’t much changed from what they were last year: fairly large throngs of trick-or-treaters, but concentrated in very specific parts of town officially designated for the official purpose of Municipal Celebration of Halloween. Lots more adult involvement than when I was a kid; lots more adult supervision and regulation; more police involvement; strictly circumscribed hours. There’s a bit of anti-climax here: Halloween has now become six weeks of build-up toward a holiday that’s mandated to take place between the hours of 5 and 8 pm on a single evening.

Anyway, part of what makes Halloween an attractive holiday, at least in the suburbs, is the contrast it offers to the usual pathetic patterns of suburban life. Sad but true: Halloween is virtually the only night of the year when people leave the electronified comfort of their oversized homes to go out on the streets and interact with their neighbors for a few hours.

Watching the scene here in north Jersey, I couldn’t help thinking about the stark contrast with Abu Dis in Palestine, where I spent the summer: in suburban New Jersey, nightfall induces kids to retreat to the fortress-like compounds of their homes; in Palestinian towns and cities, by contrast, kids are up at all hours, playing in the streets. Both sets of kids are up, mind you; it’s just that suburban American kids are inside, in front of TV sets and video games, whereas the Palestinian kids are out and about. Meanwhile, suburban American parents treat their antiseptic neighborhoods as though they were chronically populated by witches, goblins, and werewolves. At the other extreme, Palestinian parents seem unfazed by permitting their children to play in streets riven by tear gas and gunfire.

Another unspoken but attractive secret of Halloween: In many neighborhoods, Halloween is one of the few nights on which  the de facto (and implicitly de jure) racial segregation that rules suburban life is temporarily allowed to lapse. Where I live, black kids from surrounding urban areas migrate en masse to the safety and affluence of the white suburbs, in search of better candy prospects than might be possible back home. For one night, then, crowds of black people converge on white neighborhoods without anyone’s regarding it as a threat–i.e., as a prelude to rioting or looting. In other words, #BlackLivesMatter temporarily becomes #CandyMatters. Since the two messages are in principle logically compatible with each other, everyone agrees for a night to focus on the latter, and a great time is had by all. Maybe they should introduce Halloween to Jerusalem and Hebron?

Speaking of Jerusalem and Hebron, there’s a big “debate” out there about political correctness in costumes, and the (supposed) dangers of “cultural appropriation” in costume-wearing. I’m going to save that one for next year. On a related topic, however, I couldn’t help being amused at how Islam is slowly but surely finding its way into Halloween culture. I tagged behind a group of kids last night dressed as terrorists: instead of “trick or treat,” they went door to door shouting “Allahu akbar!”  (Guilty confession: I found that pretty funny.) I also find it interesting that the newer film versions of Dracula–Bram Stoker’s Dracula (1992), Dracula Untold (2014)–now go out of their way to depict Dracula’s turn to vampirism as a response to Ottoman Islamism, an interesting inversion of the usual grievance-based explanations for Islamic terrorism.

The Dracula-as-anti-Islamist theme is a deliberate departure from, almost an inversion of, the depiction of Dracula in Bram Stoker’s novel. Though Dracula’s historical precursor Vlad the Impaler fought the Ottomans, anti-Islamism plays almost no role whatsoever in Stoker’s Dracula: Stoker’s Dracula equates the “Turk” with white invaders (Wallachian, Saxon, Austro-Hungarian); meanwhile Stoker “Orientalizes” Dracula himself despite his (Dracula’s) past life (lives?) as an anti-Ottoman freedom fighter. Transylvania, Dracula tells Jonathan Harper, “was the ground fought over for centuries by the Wallachian, the Saxon, and the Turk.”

Why, there is hardly a foot of soil in all this region that has not been enriched by the blood of men, patriots or invaders. In old days there were stirring times, when the Austrian and the Hungarian came up in hordes–men and women, the aged and children too–and waited their coming on the rocks above the passes, that they might sweep destruction on them with their artificial avalanches. When the invader was triumphant he found but little, for whatever there was had been sheltered in the friendly soil. (Bram Stoker, Dracula, p. 22).

In other words, Dracula was a rock-throwing Transylvanian nationalist ready to fight any invader who dared set foot in his lands.

Which is why Stoker gives him the physiognomic treatment reserved for Oriental nationalists:

The mouth, so far as I could see it under the heavy moustache, was fixed and rather cruel-looking, with peculiarly sharp white teeth; these protruded over the lips, whose remarkable ruddiness showed astonishing vitality in a man of his years (p. 18).

Interestingly, Stoker gives a much longer description of Dracula’s physical appearance but pointedly (so to speak) omits a description of the Evil One’s eyes. All in all, Stoker’s Dracula sounds like the spitting image of Yasir Arafat. Right? 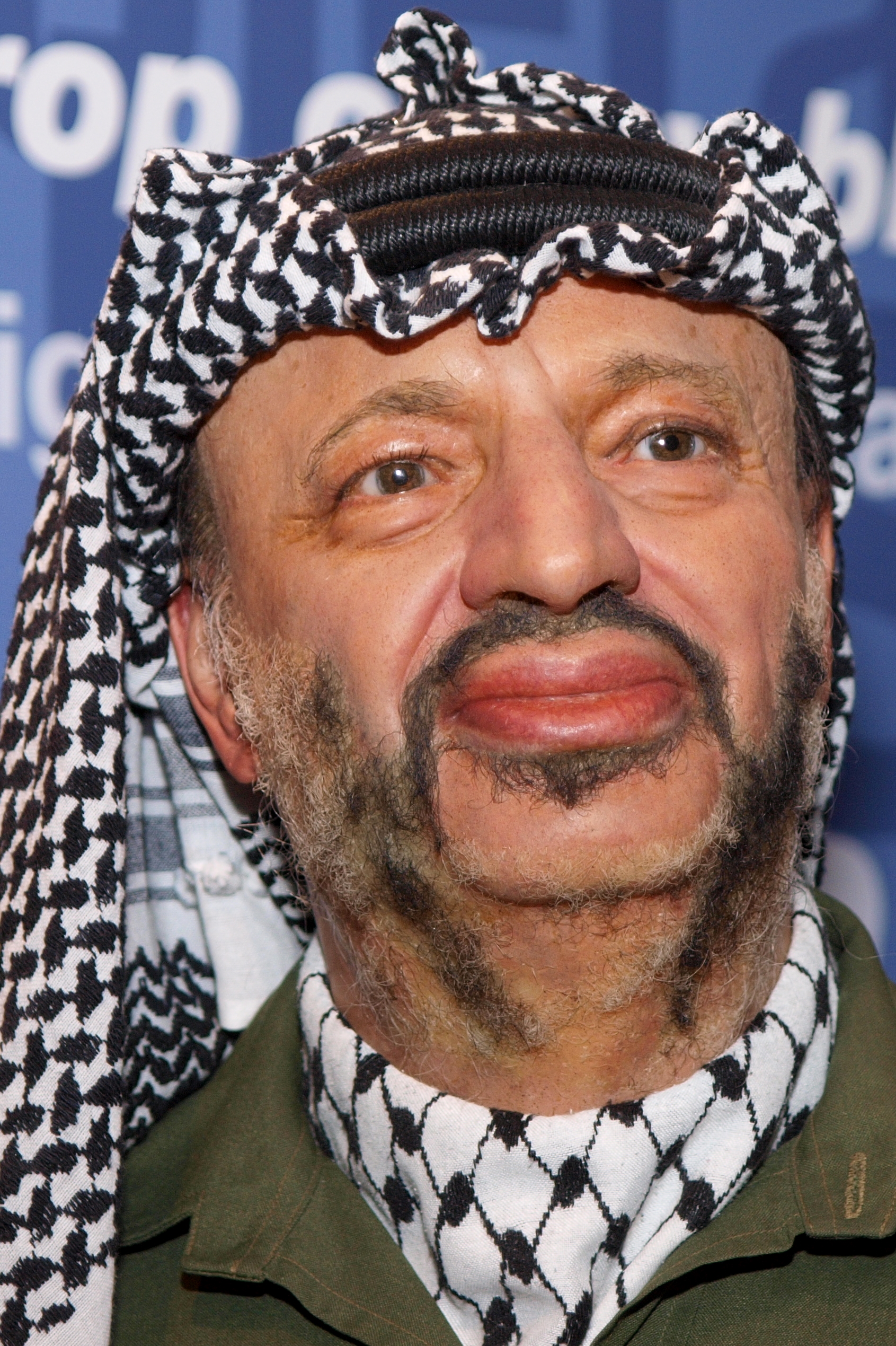 Right. Obviously, they’re not going to give the game away by opening their mouths.

Clearly, there are dissertations waiting to be written here: Dracula and the Ottoman Other, Stok(er)ing Orientalism, (Jonathan) Ha(n)k(er)ing After British Imperialism, and so on, and my only regret is that I can’t write any of them. But obviously, some have, and more power to them. Read them, the tenure-seekers of the night. What music they make!

All right, enough: off to really scary things. Like paying the rent.