My long-time friend Carol Welsh is re-defining the concept of “heroic” later today (I’m writing at 1 am) as she fights a brain tumor growing into her spine. I’ve visited for just three of Carol’s surgeries (the three brain surgeries), but could not be there for the gamma knife surgery, the chemo, the radiation, the respiratory arrests, or the spinal surgeries. Her sisters, her mom, her nearby friends, her health care providers, and her brain tumor support system have been there for everything. They’re re-defining the concept of “heroic,” too, and many other things besides. 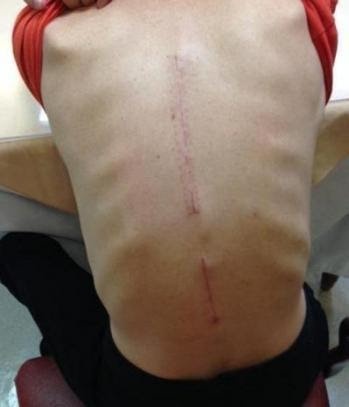 Scars from multiple surgeries, taken November 2014, before having had a few more surgeries since.

I used to bring Carol up in many of my ethics classes to make this or that point–about the nature of courage, moral luck, trauma, access to health care, so many things–using her website as a teaching tool. The issues she brings up are similar to those brought up by Chris Sciabarra in his writings and work on his own illness. But more important right now than any of that are the decades of friendship we’ve shared, from the moment she took the initiative to drag me out of my introverted shell as a college senior, dragging me into conversation, and eventually “dragging” me to breakfast and lunch with her just about every week for the year we spent together at college (1990-91). I’ll be thinking about her all day today, including the long part of my day that I spend in the OR at Hunterdon Medical Center. 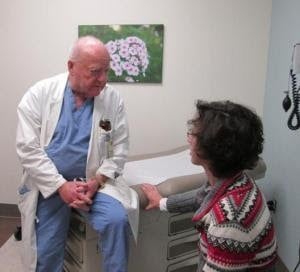 As it happens, we did a spinal bed set-up Monday night in OR 3 for a surgery that’s to take place at HMC on Tuesday. By coincidence, Carol is having her spinal surgery at the same day and time at the National Institutes of Health. It’s easy in health care to lose sight of the fact that we’re doing what we do not for “patients,” but for people. The best I can do for Carol is to take that thought with me to work tomorrow, and try to live up to it.

I highly recommend Carol’s extensive website, “Adult Ependymoma: A Patient’s Story,” but her story has also been written up in the Chicago Tribune, PR Newswire, and an article I can’t seem to access in the Winston-Salem Journal (“Upset Stomach Turned Out to be Rare Brain Disorder”). I don’t know the bioethics literature well enough to know whether philosophers have learned what there is to learn from stories like Carol’s, but I recently bought Lisa Tessman’s Burdened Virtues: Virtue Ethics for Liberatory Struggles in the hope that it sheds light on situations like hers. Alasdair MacIntyre’s Dependent Rational Animals was an important influence for me on these issues.